▪ In the first nine months: sales growth of 2.6% in local currencies
▪ Strongly negative currency effect of –6.0%
▪ EBITDA margin increased to 18.5%
▪ Over-proportional EBIT growth and increase in operating profit margin (EBIT) to 13.7%
▪ Operating free cash flow remains strong and exceeds prior-year figure
▪ Completion of acquisition of Adeplast (Romania), takeover of Modern
Waterproofing Group (Egypt), and construction of new factories in Barranquilla
(Colombia) and Chengdu (China)
▪ Outlook for 2020: For the fiscal year 2020, Sika is expecting slightly lower sales in
CHF but EBIT broadly in line with last year, implying an over-proportional rise in
EBIT in the second half.
▪ Confirmation of 2023 strategic targets for sustainable, profitable growth

Sika maintained its growth trajectory over the first nine months of 2020 despite the severe repercussions of the coronavirus pandemic, increasing sales by 2.6% in local currencies to CHF 5,805.5 million. The effect of acquisitions contributed 9.2% to the growth in sales. At –6.6%, organic growth in the first nine months of the current year was in negative territory. A strongly negative currency effect
(–6.0%) caused sales in Swiss francs to decline by 3.4%; the latter figure reflects a currency loss of around CHF 357 million.

Access to the webcast and replays are available under the following link.

"The 2020 financial year to date has been dominated by the coronavirus pandemic. With our decentralized organization, we have been able to adapt swiftly to changed local conditions in all 100 countries and gain market share. Thanks to our clear focus on innovations and sustainability and the business potential that we can exploit through global infrastructure programs, as well as to the increased demand for renovation work and our strength in the builders’ merchant business, we will be able to keep Sika on its growth trajectory and emerge from this crisis stronger than before. With our future-oriented solutions, we are the market's prime mover and enable sustainable construction and mobility." Paul Schuler, Chief Executive Officer

Sales in the first nine months of 2020 includes a strong acquisition effect of 9.2%. In a market suffering from the repercussions of the coronavirus pandemic, Sika was able to win further market share in all regions.

The EMEA region (Europe, Middle East, Africa) reported a sales increase in local currency of 3.8% for the first nine months (previous year: 10.8%). This region has been recording a slight organic growth since June. The biggest recovery was staged by southern European countries such as Italy, Spain, Portugal, and France, as well as by the Middle East. In most of central western Europe – Germany, Austria, Switzerland – and in the countries of Eastern Europe and Scandinavia – business progressed in a more stable manner. Growth in the UK continues to be hampered by the pandemic.

Growth in the Asia/Pacific region amounted to 13.9% (previous year: 31.1%). China performed particularly impressively, recording strong double-digit organic growth rates in recent months with most Target Markets expanding again. The former Parex business has been strikingly resilient to the crisis: it generated further growth in the various distribution channels. The project business in China is now also once again recording double-digit growth rates thanks to infrastructure orders. Furthermore, Australia and New Zealand have made positive contributions to regional business development. By contrast, countries such as Japan and India as well as the Southeast Asia region have been recovering only slowly from the declining business activities triggered by the coronavirus pandemic.

Global Business recorded a decline in sales of –16.1% (previous year: 3.6%) for the first nine months of the year. In the review period, the automotive sector reported a global decline in output of –23.2%. Although business volumes in the automotive area recovered noticeably in the third quarter, it will likely be a while before figures return to 2019 levels. Sika has been recording growth again in the Chinese car sector since May, and in September it was able to report sales growth in Europe and the USA.

The Americas region recorded sales growth in local currencies of 0.9% (previous year: 18.1%). Sika has enjoyed a modest uptrend in the Americas region despite the high COVID-19 infection rates recorded in Mexico, Brazil and the USA. Many of the major cities in North America remain affected by the pandemic. The situation in Latin America has improved slightly, with the southern part of the region returning to positive growth in September for the first time since February. In particular, countries such as Brazil, Chile, and Uruguay have contributed to the positive business development.

Despite the coronavirus crisis and its repercussions for business results, Sika is confirming its 2023 strategic targets. The company remains aligned for long-term success and profitable growth. With its focus on the six strategic pillars – market penetration, innovation, operational efficiency, acquisitions, strong corporate values, and sustainability – Sika is seeking to grow by 6%–8% a year in local currencies until 2023. From 2021, the company aims to increase its EBIT margin to 15%–18%. Projects in the areas of operations, logistics, procurement, and product formulation should result in an annual improvement in operating costs equivalent to 0.5% of sales.

Sika has been observing a modest upward trend in its construction markets since June, with sales returning to more normal levels. The momentum of global construction activity has picked up thanks to the gradual opening of building sites.

For fiscal 2020, Sika is expecting slightly lower sales in CHF but EBIT broadly in line with last year, implying an over-proportional rise in EBIT in the second half.

Sika’s forecasts assume that the markets will no longer be hit by the almost complete lockdowns that were imposed in March, April and May.

1 Growth in local currencies including acquisitions.

2 Sales contribution by acquired companies without considering the growth after business combination. Sales growth of the acquired businesses since initial consolidation is included in organic growth.

3 Growth adjusted for acquisition and currency impact. Sales growth of the acquired businesses since initial consolidation is included in organic growth. 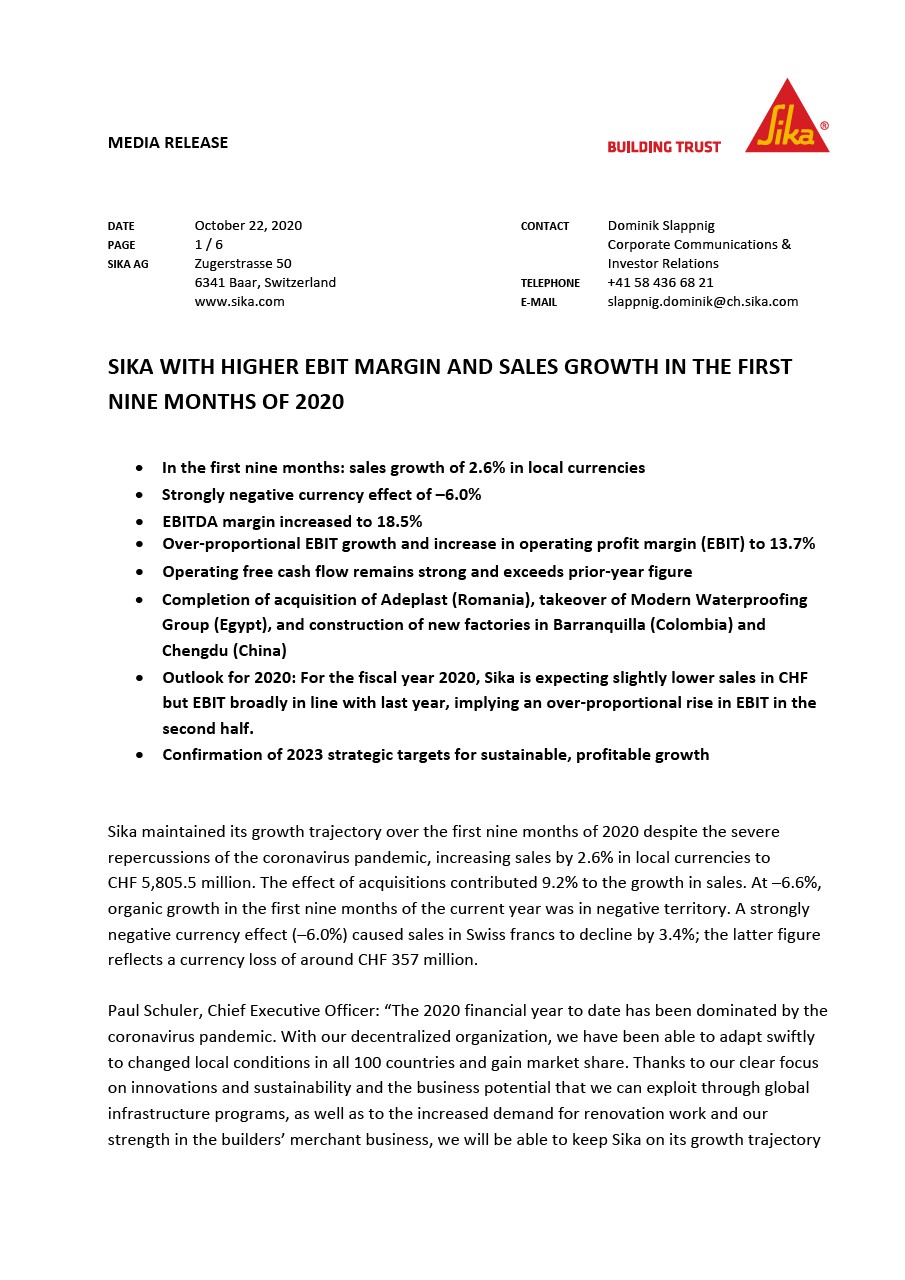 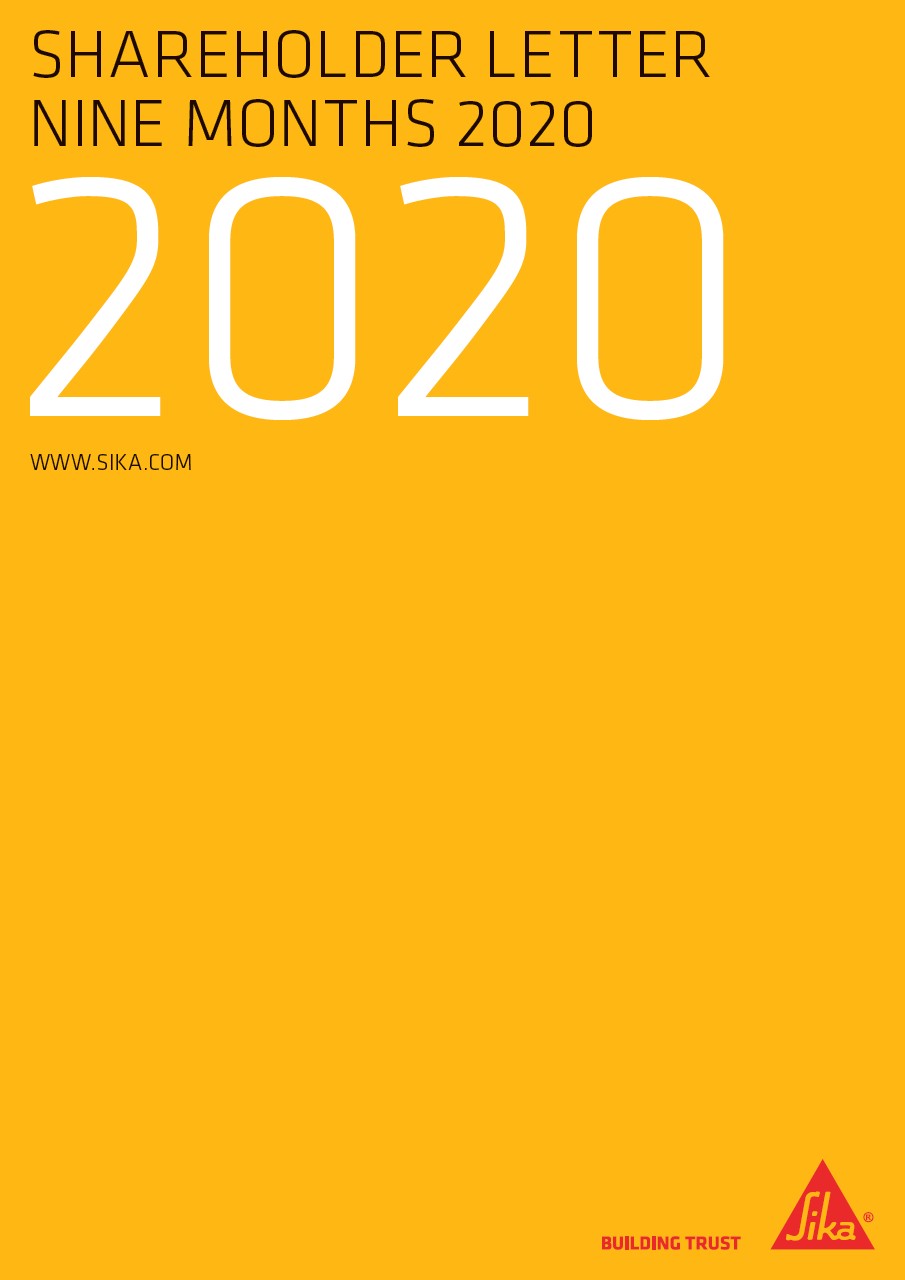